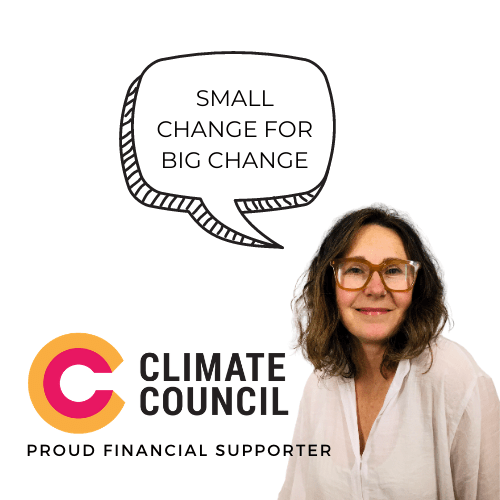 This blog is all about small changes we can make that add up to massive ones. For example, take a few dollars once a week and put it in a jar. If you knew that such a simple thing could actually alter our future, would you do it?

That’s the way I’m thinking about it. I’m foregoing one coffee shop visit every week in order to put my money where my values are and support the Australian Climate Council.

Back in 2013 the Australian Government decided to abolish its independent advisory on Climate Change. Amidst the uproar, the people involved with the original body decided to continue this important, evidence and solutions-based work with public funding.

It was one of the most successful crowdfunding campaigns of its kind in Australia. It means they are independent and can lobby media, and since then have helped to bring about 20,000 media stories.

The Climate Council was founded in 2013 by tens of thousands of Australians to create a new, an independent and 100% community-funded organisation in response to the abolition of the Australian Climate Commission.

More recently, Tim Flannery wrote The Climate Cure and remains an integral part of the Council’s leadership. In 2019 they won the Award for Charity of the Year from the Australian Charity Awards.

For all these reasons and more, we have become supporters of the Council.

If you would like to support the Climate Council, go here.