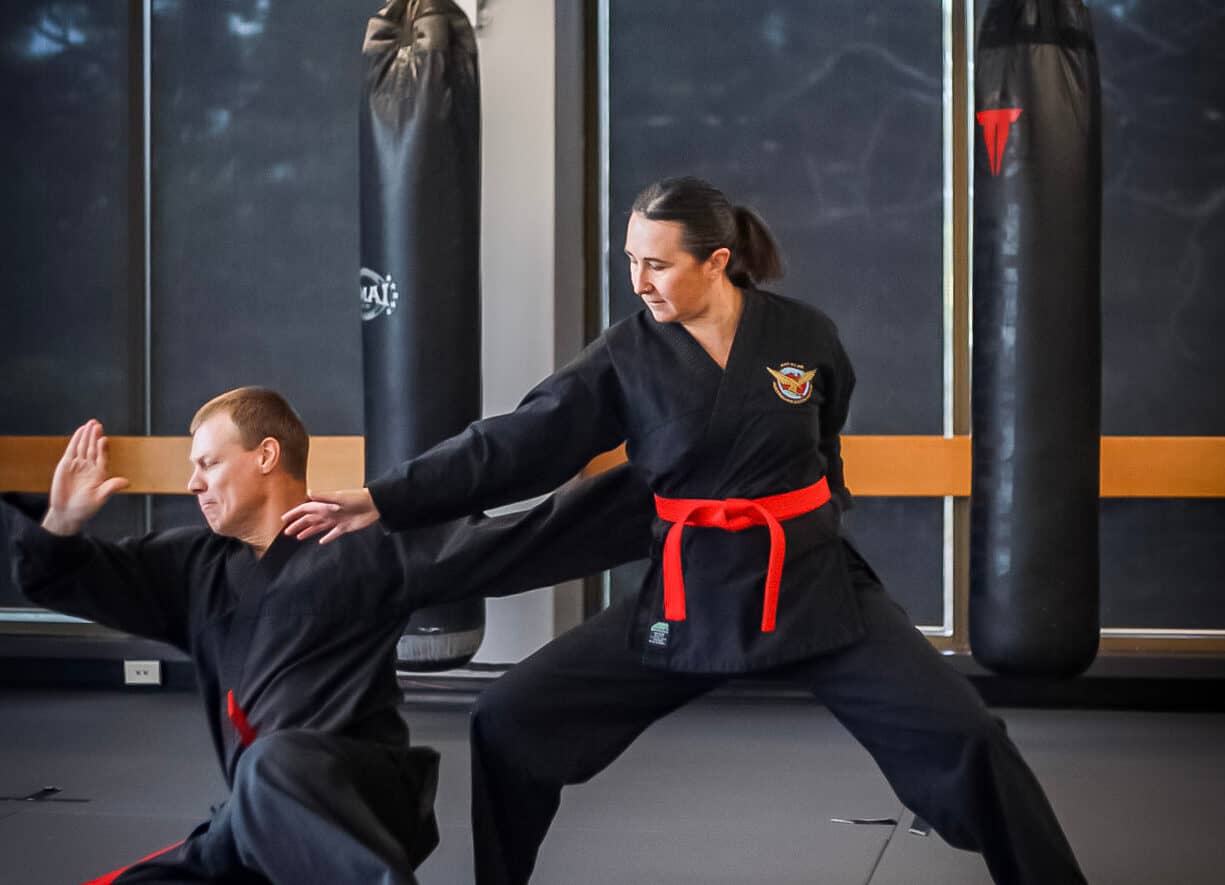 On the eve of the launch of the Australian Hapkido Association’s first Women’s Class, I thought it might be helpful to explain one of the deeper reasons why I’m so passionate about the importance of training Hapkido (especially for women) and currently working towards a Black Belt.

#triggerwarning : if you are a survivor of violence or have experienced trauma and require healing you may wish to stop reading now. Help is available here.

Many years ago (ahem) when I was a young, and single, university graduate I moved into my first apartment near Kings Cross, in Sydney. Back then it was a traditional ‘red light district’ and the nightlife, though a lot of fun, also deemed it an area to be wary of when wandering around on your own at night.

One particular evening, around midnight I was walking home from a local bar and I felt a sense that I was being followed. I quickened my pace to test the theory and heard them also speed up. That’s when I knew I could be in trouble. I began to jog. They jogged behind me, closing the gap.

Around 6 months earlier when I had signed the lease for my first little studio apartment, I was aware of the risks to my safety in the local area. My teenage cousin had been training with the Australian Hapkido Association and it had sounded fantastic. I had a feeling it would be good to get some exercise and learn some self-defence in the process plus I’d always been drawn to the ancient philosophies of Asia.

So with this small amount of training under my belt, although I was terrified and more inclined to run than put those skills to the test, I knew that I was almost home and was afraid they would follow me home. So I reluctantly slowed and turned to face them.

I saw two young men. One was standing closer to me than the other, he stood back nearer the street and seemed to be keeping watch. I was positioned with my back to an alcove by an old church and the young man who stood before me quickly grabbed both my wrists and sort of angled me back towards the dark corner. He was well dressed, had a recent haircut, ironed shirt, and smelled clean. Funny what you remember isn’t it?

I was nervous-talking the whole time saying things like “I don’t have any money but you can take my wallet if you want” and I don’t know what else – just rambling to buy time and appear calmer than I felt. The street was empty and I was scared to scream anyway fearing that this could initiate a violent reaction and escalate the situation.

Whilst I was nervous-talking I was also carrying out basic calculations. He was too close for me to do a turning kick, one of the few things I had learned to reasonable proficiency at that stage. However, he was holding both my wrists and this was something I had learned to defend against. We must have been scuffling a little bit because no sooner had I realised that there was a choice and I could actually do something to release myself from his grip I found myself standing with my back to the road, and the two men standing before me in the alcove, between me and the church. I must have actually done the moves without even realising it, instinctively, and released myself from his grip. I realised I was free.

That was when I ran. It was only about 20 metres to the front door of my apartments, around a corner and down a side passageway was the entrance to the security block. A classic situation ensued – shaking hands, trying to get the key in the lock, looking over my shoulder, hoping to hell they hadn’t followed me.

I got inside and slumped quickly into the chair crying with shock and relief. I realised one of my wrists was scratched and bruised where he had inadvertently pressed my keys against my skin – I must have been holding them in readiness to get home. It also made me realise he had been holding my wrists with some force. It works, I thought.

See, what happened in the moment was that instead of completely falling apart and letting the terror of the moment overtake me, I was calculating which technique to use. Not only did this give me some small sense of control and hope, but it also meant I was so busy plotting my escape that I was not falling apart and surrendering to the inevitability of the attack. This empowered me in some small way – enough to escape.

Reflecting on the situation afterwards it was clear they were not trying to rob me. He had not gone for my bag, he had gone for me. He had a haircut, his shirt was tucked in. This was not a guy who needed money.

Thinking back on it now it seems crazy that I didn’t go straight to the police station and report them. I don’t think I realised straight away what exactly had occurred, nor considered that they quite likely would have just moved on to find another target.

I still find it difficult to understand why a young man would take such a risk or would think that carrying out this behaviour – with a friend witnessing – makes any sense at all. I guess it isn’t something I can ever understand. It speaks to deeper issues of needing power in this arena I suppose. I can only hope this failed attempt gave him cause to rethink, though somehow I doubt that.

From where I stand now – a mother of three, living in an area of the city that is, for the most part, a lot safer – I still remember the feeling. Even writing this now my breathing changes, my chest constricts a little. Over the years, and as a result of other more serious traumatic events, I have consciously sought to heal myself with a variety of different practices – therapy, energy balancing, natural health, acupuncture, yoga, and many more modalities. And despite that so much healing in my body, mind and spirit has taken place since then (now 26 years ago) a somatic memory of the event remains.

Training Hapkido gives me a way to practice a sense of physical and mental mastery. There is no other forum in which I engage all my senses, go to the edges of my own physical conditioning and mental resilience. It helps me to tame the beasts of these memories every time I step on the mats. And even better, I know that if I encountered such a situation again (and the first and best option of running wasn’t a possibility) I would have a far greater arsenal of techniques at my disposal in order to protect myself.

If you are a survivor of violence or have experienced trauma and require healing know that help is available here.

For more information on training with the Australian Hapkido Australia or with me in the Women’s Class, click here or comment below.